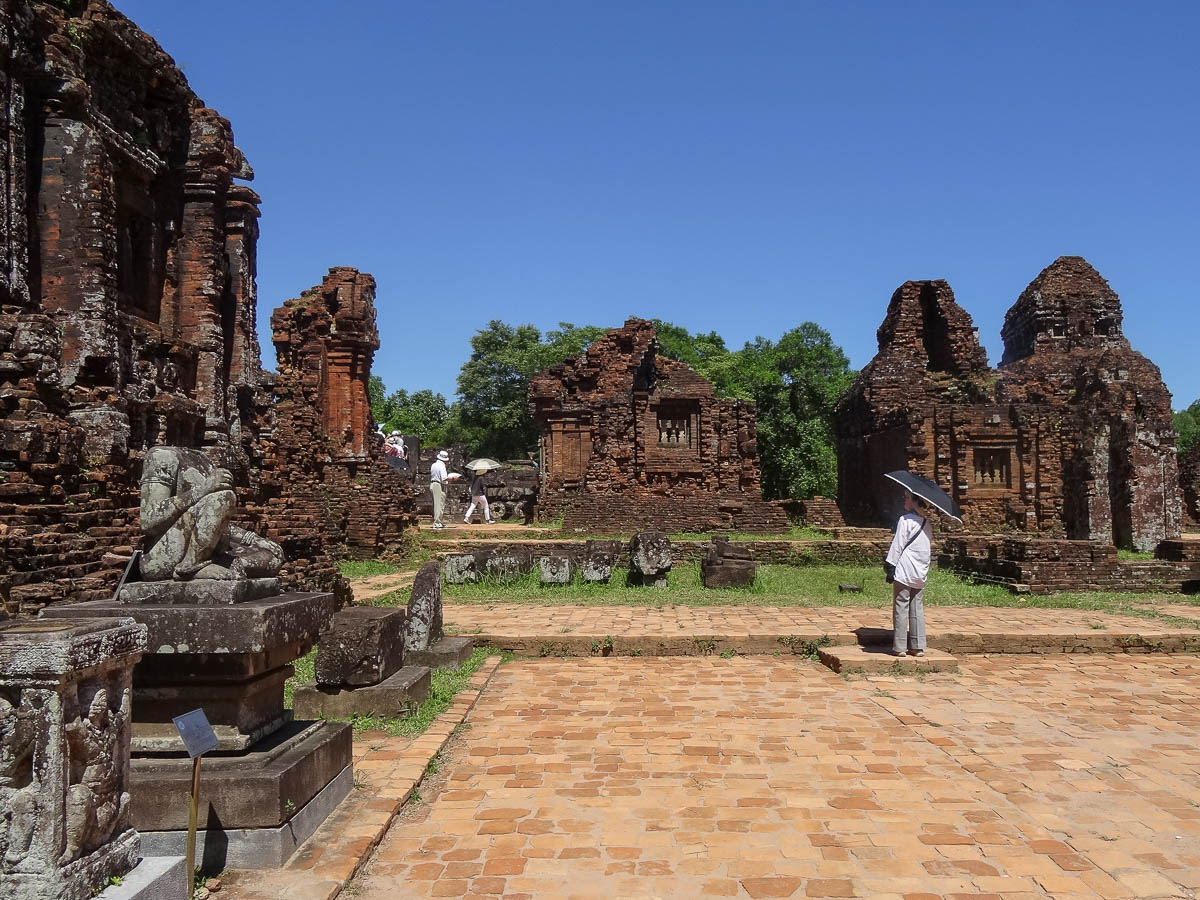 It’s been a summer full of surprises! For my birthday I was asked by my better half to pack my bags as we were going to explore Da Nang and Hoi An in Central Vietnam.  With many things to explore, the Mỹ Sơn Sanctuary, an UNESCO World Heritage Site, would be one of the items on my to-photograph list. Yet, little did I know it was just the first part of the surprise with many gifts and commitments (which are too personal to share)  …

Either way, the trip included a history “lesson” about Vietnam’s past and a visit to the Mỹ Sơn Sanctuary (or whatever is left of it). An UNESCO world heritage site since 1999, the widely spread temple grounds in the mountains are approx. 30 miles (48 km) from Hoi An and best visited as half-day tour with a guide (if you budget allows it). Every morning around 9 am, you can catch a performance of traditional Champa music and dances before venturing out to see the ruins. The complex is divided into multiple sections with some more intact than others. You can certainly see the influence of Hinduism in the architecture and its ornamentation. Sadly, many parts of the complex have been destroyed during the Vietnam War, but constant efforts, with international support, to restore and maintain the ancient temples are visible which allows us to travel back in time to experience what life was like in the Kingdom of the Champa many centuries ago. 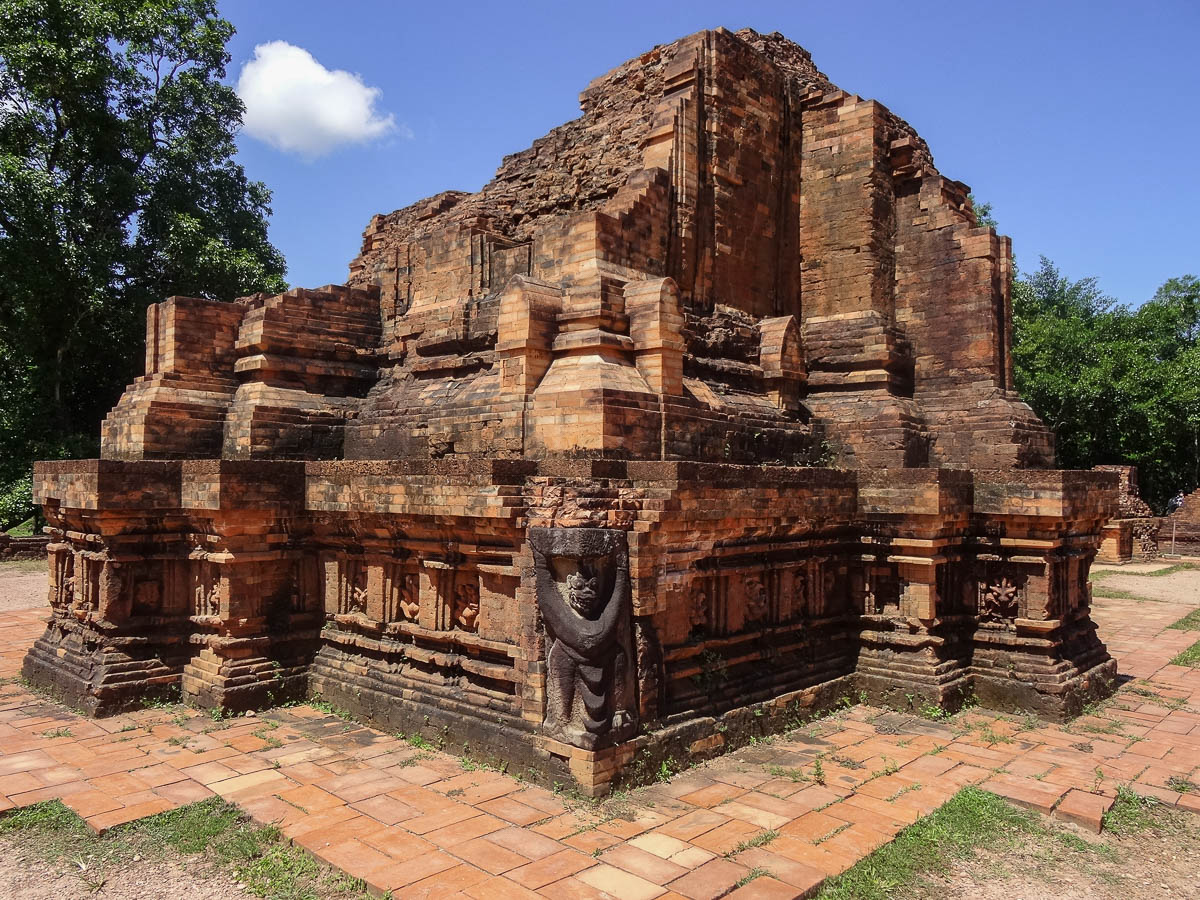 Lastly, in case you want to know little of the history about Mỹ Sơn Temples in Vietnam:

Mỹ Sơn is a cluster of abandoned and partially ruined Hindu temples constructed between the 4th and the 14th century AD by the kings of Champa. The temples are dedicated to the worship of the god Shiva, known under various local names, the most important of which is Bhadreshvara. Mỹ Sơn is located near the village of Duy Phú, in the administrative district of Duy Xuyên in Quảng Nam Province in Central Vietnam, 69 km southwest of Da Nang, and approximately 10 km from the historic town of Trà Kiệu. The temples are in a valley roughly two kilometres wide that is surrounded by two mountain ranges. From the 4th to the 14th century AD, the valley at Mỹ Sơn was a site of religious ceremony for kings of the ruling dynasties of Champa, as well as a burial place for Cham royalty and national heroes. It was closely associated with the nearby Cham cities of Indrapura (Đồng Dương) and Simhapura (Trà Kiệu). At one time, the site encompassed over 70 temples as well as numerous stele bearing historically important inscriptions in Sanskrit and Cham. Mỹ Sơn is perhaps the longest inhabited archaeological site in Indochina, but a large majority of its architecture was destroyed by US carpet bombing during a single week of the Vietnam War. The Mỹ Sơn temple complex is regarded one of the foremost Hindu temple complexes in Southeast Asia and is the foremost heritage site of this nature in Vietnam. It is often compared with other historical temple complexes in Southeast Asia, such as Borobudur of Java in Indonesia, Angkor Wat of Cambodia, Bagan of Myanmar and Ayutthaya of Thailand. As of 1999, Mỹ Sơn has been recognized by UNESCO as a world heritage site. At its 23rd meeting, UNESCO accorded Mỹ Sơn this recognition pursuant to its criterion C (II), as an example of evolution and change in culture, and pursuant to its criterion C (III), as evidence of an Asian civilization which is now extinct. (Source: Wikipedia)

And because there was so much more to see  from my trip to Hoi An/Da Nang in Vietnam, including the traditional Champa performances,than I could possibly include in one post, feel free to visit my Flickr stream and/or follow me on Instagram.

My name is AnitaM and this is my platform to explore photography & design, share my travel experiences, and delve into the digital nomad lifestyle in Asia.

💯 When something is #important enough, you do i
👉 There are a few things everyone needs to know
#TravelTuesday seems so far away ... I wonder when
🙋 Raise your hands if you're ready to get serio
We all have been there ... big plans, longest to-d
Follow My Journey